Sandsfoot Castle is one of Henry VIII's Device Forts, also known as Henrician Castles, built around 1541 to the west of Weymouth, Dorset, England, opposite its contemporary Portland Castle. Together these two forts put the whole of Portland harbour and the roads within range of their artillery, thus protecting shipping from foreign raiders, and preventing an invading landing force from forming up offshore, although the castle was always vulnerable to attack from a landward direction. Most of the castle has fallen into the sea, however the ruins have been Grade II* Listed since late 1953.

The castle dates back to 1539 and was completed in 1541, by Henry VIII as an artillery castle. It was designed specifically as part of the king's network of coastal defences to protect against both French and Spanish attacks, based on the possibility of attacks by Roman Catholic enemies due to the change in the established religion in England. It was completed two years after its contemporary Portland Castle. The castle went under repair in 1584 due to damage suffered by coastal erosion and undermining by the sea. Remedial works were later undertaken in 1610-11 and again in 1623. From 1642, the castle often changed hands and was held for the King by the Royalist during the English Civil War. However, in 1644-45, the castle was surrendered to Parliamentary forces by, governor for the king, Colonel Ashburnham. It was also considered to be of no military importance and of no further use to the Royalists. Afterwards the castle dungeons were used as a mint for striking coinage during the war, giving it a greater importance to both defenders and attackers. The castle never saw serious military action and was dropped from the Military Register in 1665.

After being dropped by the Royalists, the castle was held by governor Humphrey Weld for a long time for the government, who eventually left the castle as its condition declined. The castle was used as a storehouse until 1691. Following its role as a storehouse, the castle became fully abandoned for centuries and was left to crumble away into the sea. By the end of the 17th century, the castle was becoming a ruin, and in 1837, the southern section fell into the sea, whilst the gun deck also fell into the sea during the 18th century. Since the completion of the enclosure of Portland Harbour in the late 19th century, the castle was greatly protected from the tide and was therefore less under threat from coastal erosion. However, it became more under threat from land instability which caused further erosion to the structure. Over the years, much of the castle's facing stone was removed, especially from the easily reached lower levels, and was used in other structures, including the foundations of Weymouth's Town Bridge in the 19th century. It was the first stone bridge between Weymouth and Melcombe Regis. In 1876, a short novel titled "The Poisoned Cup" by Joseph Drew was set in the reign of Elizabeth I and used Sandsfoot Castle as its backdrop.

In 1902, Weymouth Corporation purchased the castle from the Department of Woods and Forests for a total of £150. In 1930, the castle was declared unsafe and closed to the public, although Tudor style gardens were laid out in front of the castle in 1931. During the Second World War an anti-aircraft battery was positioned at the castle. Throughout the 20th century, it remained out of bounds via fencing due to continued safety concerns and to protect visitors from falling masonry. In 2003, the castle was listed on the English Heritage Buildings At Risk Register, when it was in need of urgent work. The Royal Coat of Arms carved in stone was removed from the castle and today remains over the south door of All Saints' Church in Wyke Regis. Being Tudor, the lion rampant is joined at the shield by a wyvern rather than the unicorn.

Go and visit the Village and then come and pop into taste* Chesil for lunch or afternoon tea. Or why not start the day off with a taste* chesil breakfast and then go explore Weymouth and Portland. 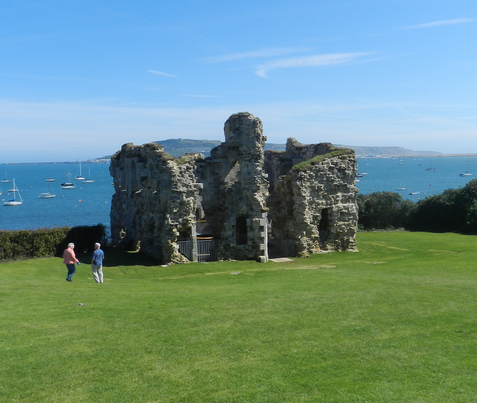