Chesil Beach is located on the South coast of England in the county of Dorset. It is a pebble beach 18 miles long and stretches north-west from Portland to West Bay. For much of its length it is separated from the mainland by an area of saline water called the Fleet Lagoon.

The Fleet Lagoon is a shallow area of saline water between Chesil Beach and the mainland. It is 13 km long. Its width varies from 900 metres at Littlesea down to just 65 metres in the Narrows. The deepest part is 4-5 metres deep, but all of the mid and upper Fleet is less than 2 metres deep. Hamm Beach is on the eastern side of Chesil Beach facing into Portland Harbour. It is formed from material from the east side of Portland moving north to form the Mere barrier and then Hamm Beach. It is an area of shallow sand dunes overlaying shingle.

Chesil beach and the Fleet looking north from Portland. Both of the beaches and the lagoon are important areas for wildlife with a number of national and international designations to help protect this important area. The area lies at the centre of the Jurassic Coast, a UNESCO designated World Heritage Site.

Chesil Beach, sometimes called Chesil Bank, in Dorset, southern England is one of three major shingle structures in Britain. Its toponym is derived from the Old English ceosel or cisel, meaning "gravel" or "shingle". The beach is often identified as a tombolo, although research into the geomorphology of the area has revealed that it is in fact a barrier beach which has "rolled" landwards, joining the mainland with the Isle of Portland, giving the appearance of a tombolo. The shingle beach is 29 kilometres (18 mi) long, 200 metres (660 ft) wide and 15 metres (50 ft) high. The beach and the Fleet are part of the Jurassic Coast.

At the eastern end of the beach at the village of Chiswell, against the cliffs of the Isle of Portland, the beach curves round sharply to form Chesil Cove. This part of the beach protects the low-lying village from flooding. The beach has been the scene of many shipwrecks, and as such was named by Thomas Hardy as "Dead Man's Bay". Westwards the shingle forms a straight line along the coast, enclosing the Fleet, a shallow tidal lagoon. The beach provides shelter from the prevailing winds and waves for the town of Weymouth and the village of Chiswell.

Go and visit Chesil Beach and then come and pop into taste* Chesil for lunch or afternoon tea. Or why not start the day off with a taste* chesil breakfast and then go explore Weymouth and Portland. 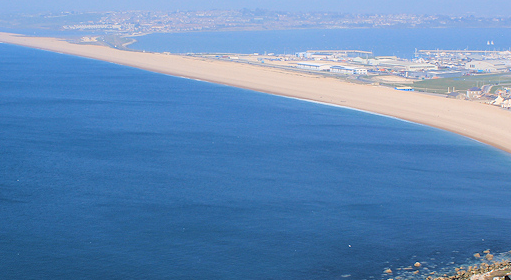