Found at the entrance to Weymouth Harbour, the Victorian Fort holds a strong strategic location across the bay. As well as the above-ground structure and outdoor areas with stunning views, the fort contains a maze of underground passages, supposedly being haunted by a myterious ghost. This fantastically educational place was built on three levels, and filled with informative displays, huge guns and a visitors Gift Shop.

In 1860 a civil engineering contractor was awarded the contract to build Nothe Fort. The first stage was the construction of a sea wall that would allow a level site to be formed on the sloping ground at the end of the Nothe Peninsula. However, due to financial problems, they failed to complete the wall. This responsibility and the construction of the fort were then given to 26 Company Royal Engineers.

Nothe Fort is a fort in Weymouth, Dorset, England. The fort is situated at the end of the Nothe Peninsula, which juts eastwards from the town of Weymouth, and Weymouth Harbour, into the sea to the north of ex-military Portland Harbour. The fort is located next to Nothe Gardens. The coastal defence was built between 1860 and 1872 by 26 Company of the Royal Engineers to protect Portland's harbour, which was then becoming an important Royal Navy base. Shaped like the letter D, the fort's guns covered the approaches to both Portland and Weymouth harbours. The design included bomb proof casemates for cannons arranged around the circular sides, and deep magazines beneath the straight, landward side. The fort played an important role in World War II, when the harbour was used as base by the British and American navies.

In 1956 the fort was abandoned, and in 1961 it was purchased by the local council. It is now a museum. The fort remains one of the most well preserved forts of its kind in the country, and the fort and its outer gateway has been a Grade II* listed building since June 1974. Its fusee steps have been Grade II listed since November 2000. These are located within Nothe Gardens, linking the car park area down to the Nothe Parade - the quay of Weymouth's Harbour. The inclined tramway and steps were built circa 1860. The three flights of steps include a low flanking wall of rendered brick, on which are placed wrought-iron plate rails, forming an inclined tramway for trolleys with double-flange wheels. It was constructed for hauling trolleys transporting ammunition, spares and stores from the quay to Nothe Fort. In October 1978, the Nothe Fort, tramway and searchlight battery at The Nothe, also became scheduled under the Ancient Monuments and Archaeological Areas Act 1979 as they appear to the Secretary of State to be of national importance.

Go and visit The Nothe Fort and then come and pop into taste* Chesil for lunch or afternoon tea. Or why not start the day off with a taste* chesil breakfast and then go explore Weymouth and Portland. 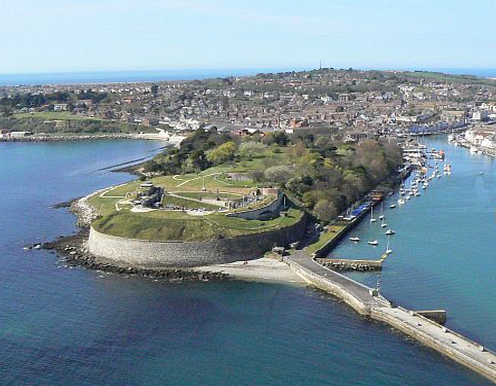