"Portland Bill and Chesil Beach are the graveyards of many vessels that failed to reach Weymouth or Portland Roads. The Portland Race is caused by the meeting of the tides between the Bill and the Shambles sandbank about 3 miles SE. Strong currents break the sea so fiercely that from the shore a continuous disturbance can be seen. Portland Bill Lighthouse guides vessels heading for Portland and Weymouth through these hazardous waters as well as acting as a waymark for ships navigating the English Channel. The Shambles sandbank is marked by a red sector light."

Portland Bill is a narrow promontory (or bill) at the southern end of the Isle of Portland, and the southernmost point of Dorset, England. One of Portland's most popular destinations, the popular attraction Portland Bill Lighthouse is found in the area. Both Portland Bill and Chesil Beach are the locations of many wrecks of vessels that failed to reach Weymouth or Portland Roads. Portland Bill is also noted for its rough coast, and is the only place on Portland where the limestone cliffs rise directly from the sea. As such many landforms including coves, ledges and caves have been formed. One of which is Cave Hole - a large cave with a blow hole.

The Bill is still an important way-point for coastal traffic, and three lighthouses have been built to protect shipping, in particular from its strong tidal race and shallow reef. The lighthouses guided vessels heading for Portland and Weymouth through these hazardous waters as well as acting as a waymark for ships navigating the English Channel.[2] The Bill's three lighthouses are the only built on the island, except for the Portland Breakwater Lighthouse, located at Portland Harbour.

The name "Portland Bill" has its roots in "The Beel" as named on early maps. This derived from the beak shape of Portland Bill. From 1588 onwards, when the area was part of a crucial Armanda invasion-warning network, it was often named "The Beacon".

Go and visit Portland Lighthouse and then come and pop into taste* Chesil for lunch or afternoon tea. Or why not start the day off with a taste* chesil breakfast and then go explore Weymouth and Portland. 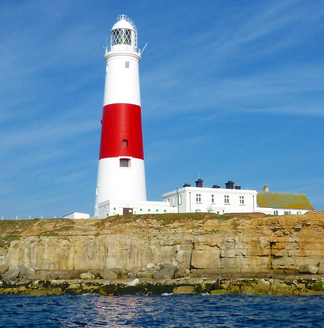